Let's recall some timing connections of Ukraine War, which nazis unleashed already eight years ago by their putsch in Kiev and by their genocide of Russian-speaking citizens, being supported by the fascists of the "West", and its current hot phase, which they've provoked by their attack on Donbass and other extortion, and to that I'll add, what God has written about that on Ash Wednesday 2022 on the Sun, and some my explanations... 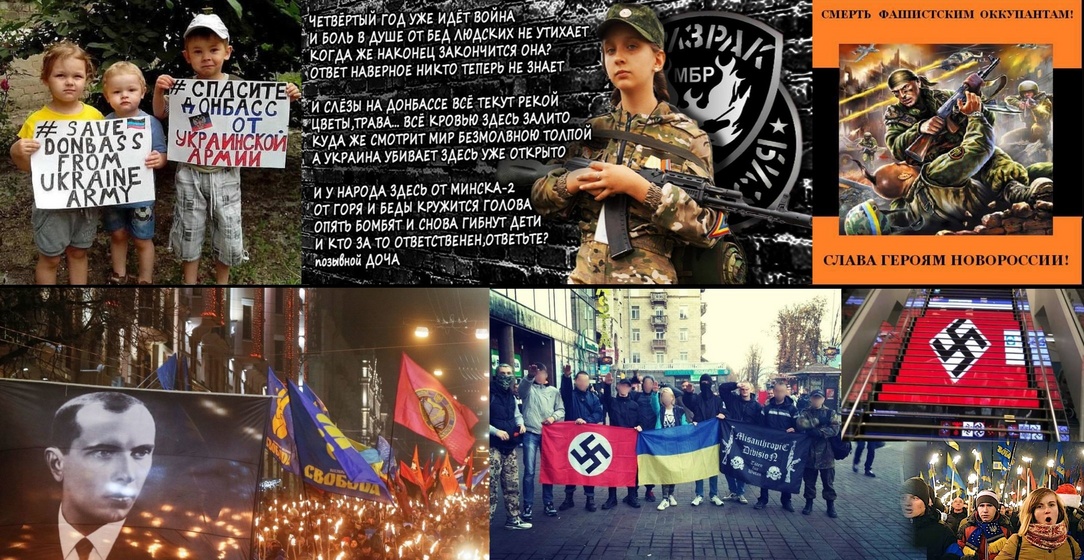 Some liars among our politicians have been proclaiming, that it's "unprecedented" and "unprovoked" "Russian aggression"...

In February 2014, during Olympic Games in Sochi 2014, passed off a putsch in Kiev called "Maidan".
In March 2014, Krymea proclaimed independence, and after that a reconnection with Russia, based on a free Referendum, declared by local Parliament, so it was a prime example of Democracy (and self-determination) in practice. Insisting on sovereignty of a remote Center against the will of local people is rather a Feudalism. The word "Annexation" in case of Krymea is evident lie. (Or rather try to ask them, what do they think about annexation of Golan heights and West Bank, which really were an annexation.) Both of these (Krymea and Golan heights) are fait accompli (thing accomplished and presumably irreversible) today, and nothing can nor will be returned against the will of local people.
Consequently two peoples' republics of Donbass proclaimed independence too in year 2014, but de-iure they were not recognized by anyone, and Ukraine started to wage a lengthy Civil War against them, with shelling of civilians and international observers, and with breaching of all agreements, which were negotiated in Minsk and elsewhere...

Russia has been striving for eight years to solve this by peaceful means and negotiations, but in vain...

Similarly as during Olympic Games in Beijing 2008 Gruzia (Georgia) attacked South Osetia, where Russia has promptly achieved Peace by Strength, so during Olympic Games in Beijing 2022 Ukraine attacked Donbass on 2022-02-17 (in Czech language: war on Ukraine started 2022-02-17, archive.ph/igv5l) and on 02-19 fascist Zelensky has been threatening on Munich Conference on Security, that Ukraine will strive to attain Nuclear Weapons, (according to analytics) in order to blackmail both Russia and the West...

After Donbass announcing mobilization on 02-19 and after their evacuation of tens of thousands of women and children into Russia, Putin recognized on 02-21 sovereignty of DNR and LNR, which was approved on 2022-02-22 by Russian parliament, and on 2022-02-24 exactly according to international law on Just War he stepped to aid the Donbass - according to Ius ad bellum, according to Casus Foederis - the right to defend the ally, with whom you have a mutual defense agreement against an external attack...

Similarly, as during shooting down of MH17 flight on 2014-07-17 by Ukrainians on the border of Donbass in that same hour Israel started biggest massacre of Gaza (as if they knew, that the World will be looking elsewhere?),
so this contemporary war on Ukraine started still during enacting of Pandemonic Laws in multiple countries, in some of these they even breached parliament rules and enqueued it too soon into the program, because their masters already knew, that they will unleash provocation against Russia on Ukraine, still during Olympic Games...
(Fascist Pandemonic Law gives dictatorship powers to the clerks of state departments without control by Parliament and by Judiciary, it is breach of balance of three pillars of Democracy in the benefit of Executive, and it is denial of basic liberties of the citizens...)
And now, while Liar Media pump Hysteria, Lies and sometimes Euphoric Hate against Russia, in obscuration since 2022-03-01 on WHO session in Geneva, they want to establish Global Totality, where this Corrupted Puppet of Oligarchs will command Totalitarian and Murderous Pandemonic measures, they want to have authority above our Constitutions and Laws...

During Olympic Games in London 2012 there has not been any provocation against Russia, but there they've proclaimed to everybody, how do they plan to exterminate us by a P(l)andemic and Vaxxination...

On Ukraine reportedly Russians foremost destroyed Biological laboratories of Pentagon and Israel, where next Epidemics were being developed, which has been confirmed also by Russian side later...

In Czech republic and elsewhere in Europe on 2022-02-25 neo-bolsheviks on the anniversary of Bolshevik Revolution in Czechoslovakia (since 1948-02-25) started blocking Independent Journalists and Freedom of Expression and Speech (foremost as a revenge for opposing the vaxxination holocaust, and perhaps as a preparation for a next round?) - so the Rule of Law and Democracy and Plurality of opinions here has meanwhile definitively terminated, and remained just a Fascist Hysteria and a Propaganda of hired Demagogues, and Criminal Regime ignoring Laws, Justice and Constitution...

Also the citizens of Ukraine are terrorized by their neo-Nazis and Banderites, from which Righteous Putin will liberate them soon... They've elected Zelensky, because he's been promising peace on Donbass, but he did very opposite and intensified fights there... Ukrainians have been deceived by Nazis...

So when the West delivers weapons to Ukrainians, who want to give them to Civilians, they will most probably give them to gangs and nazi militants (Azov, Banderites), and they will use them foremost against Ukrainian citizens, when Russia will win there and Nazi gangs will not be "contented" with stance of citizens to the new "regime"...?!
So this weapon support of fascists, performing genocide, is evidently a crime, and therefore our politicized Chief Prosecutor preemptively threatened jailing for even a verbal support of Russia, which does not harm anyone (beside ruining reputation of liars), supposedly for approval of crime and genocide...? Absolute opposite is right, since weapon support of Ukraine Fascists is a crime! And victims of that would be foremost the ordinary Ukrainians, when they'll be terrorized by their neo-Nazis, as they do for long (and with impunity so far)...

Russians during the war advance as carefully as possible, contrary to for example USA, which during its frequent wars foremost destroy civil infrastructure as much as possible, as they've shown us recently in Yugoslavia, in Lybia, in Syria, and thrice in Iraq... (But many of us here commit misleading generalization, for example "USA" or "Ukraine", but ordinary Americans and some of Ukrainians are quite cool people, but for these wars are foremost responsible Jews dominating America, and making various offensive Doctrines, in the interest of Israel and Military-Industrial Complex, but not in interest of ordinary Americans...)

And foremost I am glad, that Russians (so far) ensured security of nuclear power-stations of Ukraine, so that the Fascists cannot destroy them by a sabotage and provoke a huge ecological disaster...

-------
On Ash Wednesday 2022-03-02 the God has displayed on the Sun a huge sign of Ukraine, somehow slanted, and within it written Ecce, and above that same in English "See". This word is used supposedly about unjustly persecuted, and Pilate used it above whipped Jesus Christ, during self-cursing of onlooking Jews...
Under the Ukrainian sign there is written Рос in azbuka, meaning Россия (Rossiya), and above that in azbuka perhaps Уа as Ukraine. On left side vague USA, and on right side jEW. Gradually the inscription in the middle on the Ukrainian sign changed to "sick", and the inscription on right (and perhaps at bototm also) changed to EU... 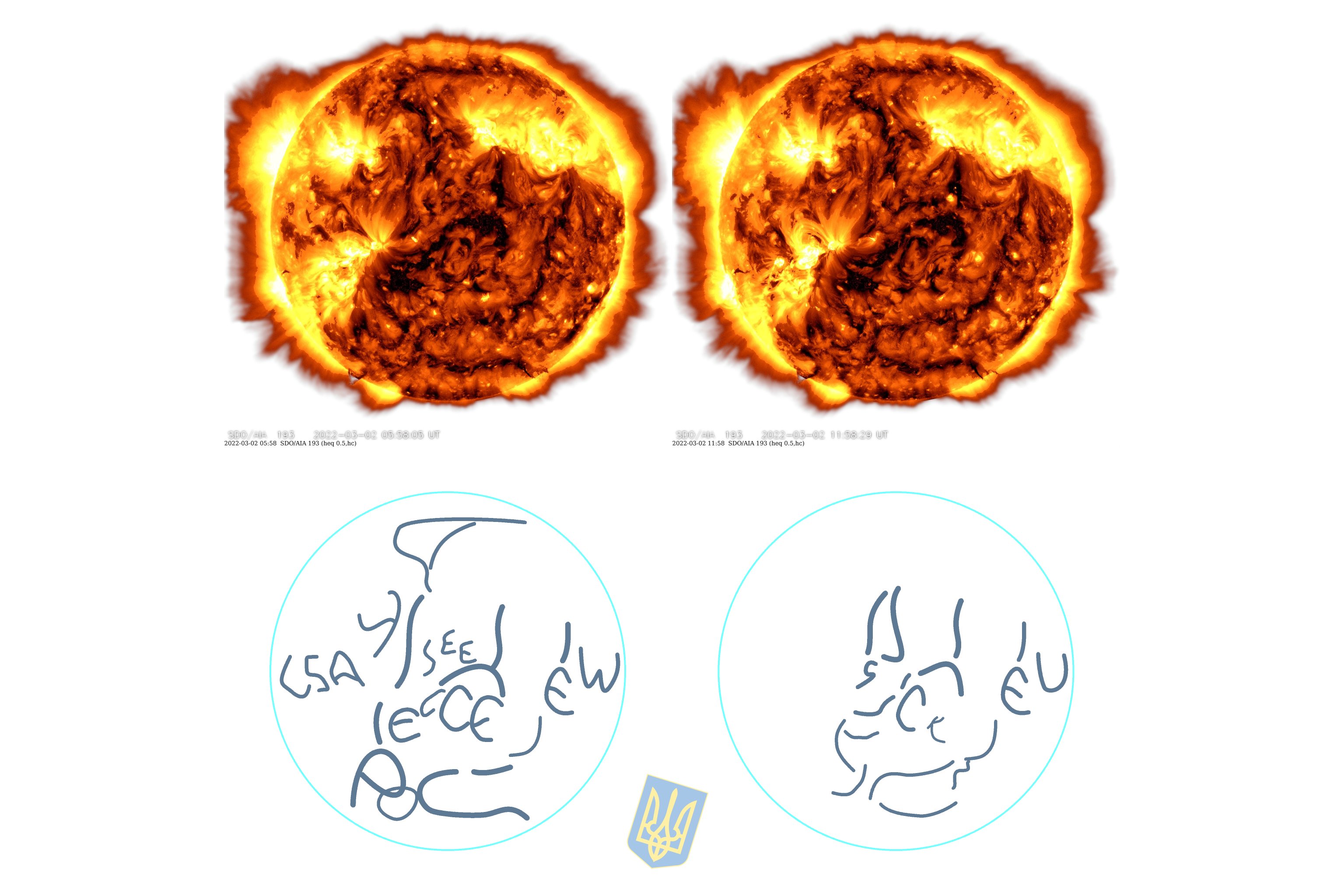 I've explained above, how EU and USA are harming by their weapon delivery and warmongering foremost the Ukrainian people, and how Russia and Ukrainian people are unjustly persecuted by Ukrainian and supranational Fascism...
How Ukraine and EU are "sick" be their Fascism and Hysteria, by loss and betrayal of structures, which should have been Democratic, but are not any more...
How also the common people of USA are terrorized by their neo-fascists (hidden behind a lying label "Liberals"), with the plan to exterminate foremost them by Plandemic and Vaxxination...

Why our hatemongers, regurgitating their Lies and Hate against Righteous Russia, and against their both truth-telling or fallible fellow-citizens, calling us falsely "Disinformers", do not understand, how it will backfire on them soon, how they are loosing credibility in eyes of their citizens, which they betrayed ?!

I hope, that righteous Putin will liberate Ukraine from its Nazis soon, (soon, so as to minimize losses of civilian citizens), and that he will not betray people of Donbass by some cheap agreement with Fascist Zelensky and with Banderites, who proved many times in recent years, that they fulfill no agreements at all... Freedom is not a cheap thing, but after all it is worth all woes coming with its attaining...

But who will help us Europeans with our Fascists (EU commission and our governments persecuting journalists and ignoring freedom of speech), and with correcting moronized part of the population ? It will be a real hangover, when the people will start to sober up and will start to see, how are they dominated by Liars and Demagogic Propaganda of the "West", and by Cultural, Medial and Political Prostitutes...

It's sad, when Europe must be instructed about Democracy by China, and about Freedom of Press by Russia... Where did we strayed?! (It's a pity I cannot give you link to those articles, since they are on servers, which Censors blocked here...)